Local Direct Democracy in the Wake of Rapid Global Change

Local Direct Democracy in the Wake of Rapid Global Change

Note: This is a short analysis meant to be submitted for a course and is not peer reviewed. As such, errors may exist. Please feel free to correct me or contact me with ideas!

Within the last ten years, protests have been on the rise globally, from the Occupy movement in New York City, the Arab Spring uprising, or the recent Umbrella protests by students in Hong Kong. These have been due to more general causes, such as the recent economic downturn, human rights abuses, lack of representation in local and national governments, and perceived global injustices (Ortiz et al, 2013). The rate of GDP growth has itself declined in recent years, as the rate of protests has increased. The correlation coefficient between the GDP and number of economic protests globally is 0.97, suggesting some strong connection between the two.

Figure 1 The US GDP (blue dashed line) and the number of global economic inequality protests (red line) from 2005 to 2013. Error is standard error. The reported R is the correlation co-efficient of the two datasets. Protest data from Ortiz et al 2013, GDP data from World Bank. Analysis by Kyle Monahan (kyle.monahan (AT) tufts.edu)

The power of the global economy to cascade influences from country to country is one of the factors which led to the increase in global protests. A small number of corporations control a majority of the global monetary flow (Vitali et al, 2011), which creates a system with few links that is very sensitive to small changes within the key players. These changes impact the even the regional level which then ripple back (through social movements which are magnified by media attention) up to the national level. In times of economic troubles, social outcry remains strong within all governments. The structure of governments may influence local actors, but local actors can also operate independently of government influence at some scales. For this, we will look at the case of an experimental direct democracy in Indonesia and the roots of a popular democracy in rural China.

For especially complex or “wicked” water problems, systems with more direct democratic principles have been suggested to highlight a need for collaborative adaptive management to solve these problems (Susskind et al, 2013). We suggest that these large, process based approaches are not always needed, especially on the small scale (Ostrum’s operational level). Local decision making has been a recent trend in the developing world, and with the increase in protests, some amount of autonomy has also reached some populations within the developed world. The provisioning of public goods such as water are normally appropriated by governments (Susskind et al, 2013).One experiment by Dr. Olken from Massachusetts Institute of Technology actually tested the effectiveness of direct-elections through the use of plebiscites. These were direct elections (voting) by all adult community members on projects which would influence them. In another area, the women voted directly on projects that would relate to them.  These methods produced greater perceived benefits, higher willingness to contribute and better long term sustainability (Olken, 2010). However, the women’s project was selected to be in a poorer area, “which seems to suggest the plebiscite shifted power toward poorer women who may have been disenfranchised in a more potentially elite-dominated meeting process.” This highlights that there are benefits to giving under-represented people power; but this power transfer must also insulate the people from the pressures of those with power in their community – as the women selected a project which was very similar to the elite preference in the area. In this way, the local level was undermined in project type selection by the power-controlling elite, but the direct voting process still created more development in poorer areas and more densely packed areas. This suggests that the transfer of power to underrepresented groups can create a functional democracy even within a vacuum of process, no matter what the overarching government type within the country is.

Given this, it could be suggested that as populations increase this type of democracy becomes more feasible. As populations and scales increase, governments cannot reach (physically, socially) the local level populations as easily or rapidly. These conditions are currently found in rural China, where villagers have continued to elect their representatives in a democratic fashion, with nominations and direct voting. We know that the representative process can be flawed in some ways, after all Germany was a representative democracy when Hitler was elected into power (Kershaw, 2008), but we suggest that at the local level these direct voting processes can be effective. 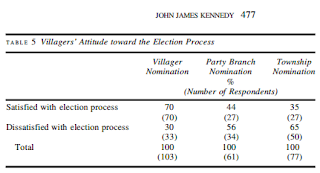 In this way, stakeholders can approach an equal level playing field with governmental actors, even within the more authoritarian governments of the world. In this era of increasing worldwide tensions and clashes over ideology and policy, grassroots resolution of environmental problems, especially water problems will be increasingly important. So called “wicked” water problems are more commonly solved by overcoming impasses in the social arena (van Bueren et al, 2015) – these developments in deliberative democracy demonstrate multiple possible applications in the global water arena.